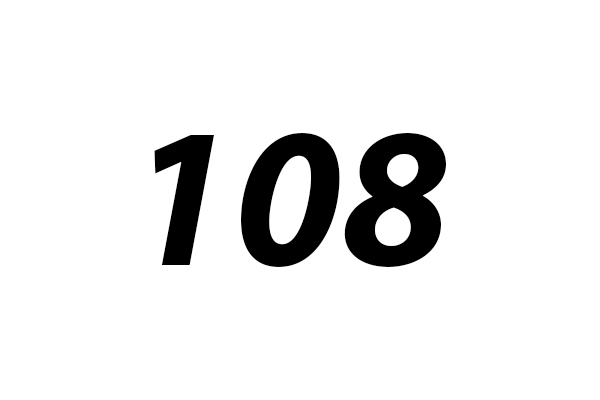 In Euclidean space, the interior angles of a regular pentagon measure 108 degrees each.

108 is a number that is divisible by the value of its φ function, which is 36.

#Religion and the arts:

The individual numbers 1, 0, and 8 represent one thing, nothing, and everything(infinity).

108 represents the ultimate reality of the universe as being (seemingly paradoxically) simultaneously One, emptiness, and infinite.

Hindu deities have 108 names, while in Gaudiya Vaishnavism, there are 108 gopis of Vrindavan. Recital of these names, often accompanied by counting of 108-beaded Mala, is considered sacred and often done during religious ceremonies. The recital is called namajapa. Accordingly, a mala usually has beads for 108 repetitions of a mantra.

Many East Asian martial arts trace their roots back to Buddhism, specifically, to the Buddhist Shaolin Temple. Because of their ties to Buddhism, 108 has become an important symbolic number in a number of martial arts styles.

According to Marma Adi and Ayurveda, there are 108 pressure points in the body, where consciousness and flesh intersect to give life to the living being.

1. The atomic number of hassium.

5. In the Manga and Anime series Shikabane Hime Aka and Shikabane Hime Kuro (Corpse Princess), the shikabane himes must hunt 108 evil undead corpses in order to ascend to heaven.