#1 Much of Israelis are immigrants. Israel absorbs more immigrants per capita every year than any other nation, including the USA.
According to Wikipedia, Israel is one of the top 3 destinations Americans immigrate to when they leave the U.S. (The other two are neighboring Mexico and Canada!)

#2 Israel has two official languages (Hebrew and Arabic), and English is common there as well.

#3 Israelis have more PhD's and MD's and advanced degrees than any other nation, and are in the top five of nations for per-capita scientific publication output. They have more doctors, lawyers, engineers, etc. per capita than any nation. The number of high-tech firms located in Israel is exceeded only by the USA's Silicon Valley region. 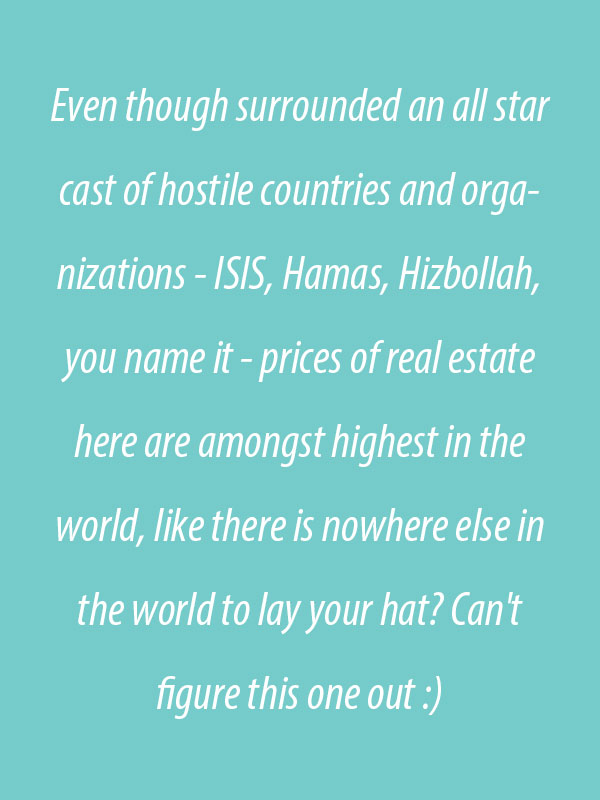 #5 Israel and Egypt were the two Middle East nations in the list of top 10 fattest countries on earth.

#6 Israelis also watch a lot of television, behind only the USA and UK.

#7
Israelis are not all Jewish. They are a very diverse people.
Over 20% of Israelis are Arabs, including Muslims and Christians. 4% are "other," including Samaritans, Druze, Bahai'i, Vietnamese, Assyrians, Armenians, Circassians, Romani, and Africans, and many more.
Members of all these groups and religions are allowed to vote and hold office. In fact, Arabs have been in Israel's legislature and government continuously since its Independence.
Not all Jewish Israelis are white. Many Black Jews, especially from Ethiopia, live in Israel. Latino and Asian communities exist as well.

#8 There are Israelis doing business everywhere from Australia to Zanzibar, and Israelis have launched major projects in biotech, clean energy, defense, tech, and more - all over the world.

#9 Israelis are among the most well-traveled countries on earth, despite the fact that they are not able to travel to their neighboring countries.
Only Aussies beat them, as far as I'm concerned.

#10
There is no class distinction in Israel and money is no concern when looking for a partner, especially since only a fraction of the population is above middle-class. Most Israelis are satisfied being underpaid as long as their job allows them to get out, enjoy life, spend time with family and friends, etc.
As far as Israelis are concerned, what they love is enjoying life. Going to a cafe, then the beach, then a restaurant, then the movies/a museum/a show etc., then a club - that's the perfect day.