#1
With only around 14,800 square miles (38,400 square kilometers) of territory, Bhutan is roughly half the size of South Carolina. The country is slightly smaller than Switzerland. Much of the terrain is made up of mountainous slopes.

#2
One of 43 landlocked countries in the world, Bhutan is about half the size of the state of Indiana. 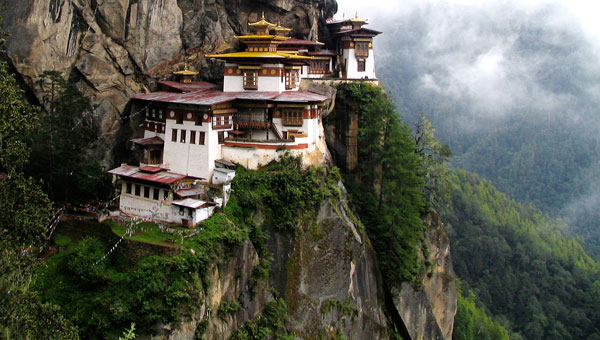 #4
The “takin,” a goat-antelope, is Bhutan’s national animal.

#5
Bhutan is the only nation in the world where the sale of tobacco is banned.

#6
Bhutan is one of the only countries in the world where citizens have a constitutional obligation to preserve and protect the environment.

#7
Rather than using the GDP as an economic index, Bhutan measures its overall “health” through the four pillars: sustainable development, environmental protection, cultural preservation, and good governance, which together form the Gross National Happiness or GNH.

#8
The capital of Bhutan is Thimphu. It is one of the two national capitals in the world that does not have traffic lights.
The other is Ngerulmud, Palau.

#9
Bhutan is the world’s only carbon sink – it absorbs more CO2 than it gives out – and the only country whose largest export is renewable energy: they sell hydroelectric power.

#10
Bhutan very easily and peacefully went from a Absolute Monarchy to a Constitutional Democracy thanks to the 4th King.

#11
At 24,840 feet, Gangkhar Puensum is the highest point in Bhutan—and the highest unclimbed mountain in the world. It lies on the border with China.

#12
Bhutan is the only country in the world to have banned plastic bags. They have beautiful bags made of paper to replace them. They have not yet achieved their goal to be completely plastic bag free but very close.

#13
Until 1999, there was a ban on using television and the Internet in Bhutan. In 1999 the government lifted the ban making Bhutan one of the last countries to introduce television. In his speech, the King said that television was a critical step to the modernization of Bhutan as well as a major contributor to the country's Gross National Happiness.

#14
Bhutanese receive free education from the government. A heavy emphasis is placed on Buddhist teachings. Most schools have an English curriculum.
Until education reform was passed in the 1990s, only around 30 percent of males and 10 percent of females in Bhutan were literate.

#15
Paro Airport is the only international airport of Bhutan. Surrounded by the towering peaks of the Himalayas, Paro is one of the world’s most challenging airports for pilots. Indeed, only eight pilots in the world are currently certified to land here.

#16
Every body in Bhutan smiles all the time. It is very refreshing. They are at 65% in achieving the their happiness goal. The king is very serious at attaining this 100% goal.

The World's 15 Most Beautiful Cities