#1
It’s the “roaring 20s” again so I’m going to take inspiration from the Great Gatsby and continue to not have read any books since high school.
pixelatedboat / Via twitter.com

#2
Teacher: you're currently failing english, are you reading for extra credit?
Me: I'm reading Animal Farm, the author is so good
Teacher: orwell?
Me: yeah [sweating] I meant the author is so well
daemonic3 / Via twitter.com

#3
Ron Weasley: i have to use old books
Harry Potter: wow
Ron: and torn up shitty clothes
Harry: yuck lol
Ron: would be crazy if my best friend had a vault full of gold and could maybe help me out a little
Harry: ya lmao that would be crazy
leakypod / Via twitter.com

#4
Before you turn 18 you have to choose exactly one of these books to read and then never stop talking about for the rest of your life:

#6
So you mean to tell me , Willy Wonka sent golden tickets AROUND THE WORLD, and 5 WHITE children got them all?!?!!
PotatoHamps / Via twitter.com

#8
editor: this better not be like last time
kafka: it's a coming of age story
editor: ok
kafka: about a boy who's changed, but his family won’t accept him
editor: i'm listening
kafka: because he's changed into a bug
editor: there we go
kafka: like a real big fu*kin bug
ellewasamistake / Via twitter.com

#9
I’d just like everyone to know that one of my pals thinks “what a sad little life Jane” is a quote from Jane Eyre by Charlotte Brontë and not from the greatest ever ending to come dine with me.
gothicdogsclub / Via twitter.com 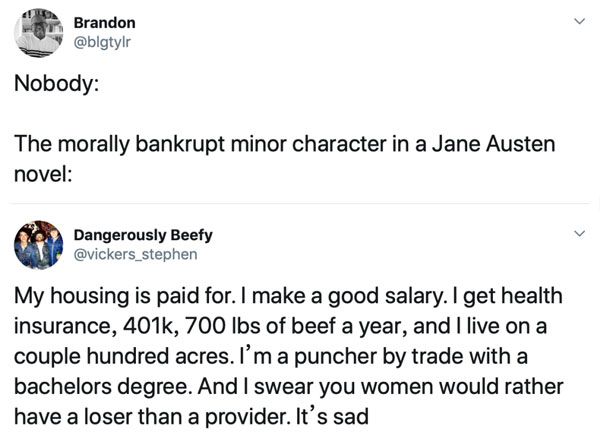 #12
HARPER LEE: I don't know what to call my novel
MOCKING BIRD: It's probably garbage anyway
HARPER LEE [picking up a gun] ok I have one idea
ArfMeasures / Via twitter.com 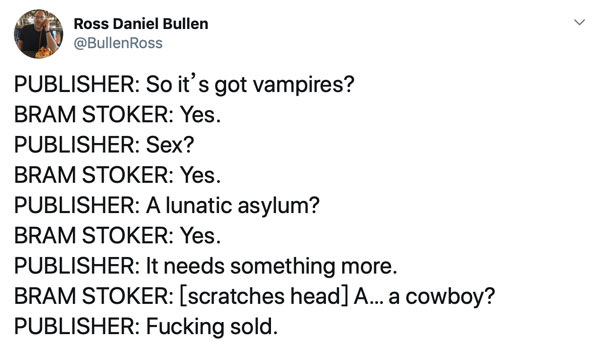 #14
you: let’s get this bread
j.d. salinger, an intellectual: let’s catch this rye
yoiain / Via twitter.com

16 People Who Should've Thought Before They Tweeted