#1
In 2020 we are not talking to any guys named matt
unrealizzztic / Via twitter.com

#3
boys that will definitely ruin your life:

1. any boy named kyle
2. all matts
3. chads (or anything with -ad)
4. any variation of zachary
5. any guy whose name starts with j
unrealizzztic / Via twitter.com

#4
Dating apps be like:
Matt, 30, financial analyst, enjoys craft beer and hiking
Matt, 33, holding a dead fish: “let’s eat pizza and watch the office”
Matt, 28: “if you don’t work out we won’t work out” “go birds” 6’1” because apparently that matters”
jessbee_ / Via twitter.com

#5
Have you or a family member ever dated a guy named matt. you maybe entitled to compensation
sarahnicoleryer / Via twitter.com 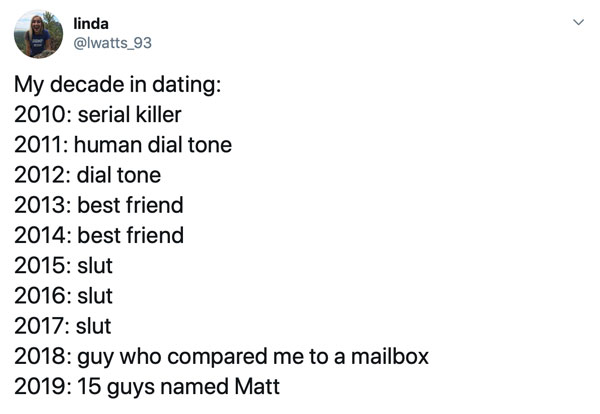 #8
What up we’re 5 White Dudes in a Band, this is our drummer Mustache SticknPoke, our bassist NailPolish Earring, lead singer Denim Glasses, and 2 guys named Matt. Altogether we have 3 famous dads, 6 DUIs, and 4 pics of us on a couch outside.Our EP ‘My ex is crazy’ out on bandcamp
DerivativeSin / Via twitter.com

#10
The hardest part about working in tech is telling the difference between all the white guys named matt.
kierstennamber / Via twitter.com

#11
Frat boys will find out you like Kpop and be like "WTF dude 12 guys in one group lol how do you tell apart they look the same" even though they had 4 white guys named Matt in their pledge class of 15.
stephengriswold / Via twitter.com

#13
I do believe i was put on this earth to systematically ruin the lives of white men by dating them, to ensure that guys named matt have full blown panic attacks every time they get a text message.
danadonly / Via twitter.com

#14
There's too many guys named "Matt" at this Whole Foods.
Eden_Eats / Via twitter.com

#15
When I am king, all welcome mats will be replaced by guys named Matt who lay down in front of doors saying "welcome" to whomever approaches.
jrza206 / Via twitter.com

15 Hilarious Dad Tweets About What Father's Day Is Actually Like