#1
The look in my wife's eyes when she left for Target makes me think she is going to try and save the economy in one trip.
simoncholland / Via twitter.com

#2
My wife didn't order anything from Amazon yesterday so the UPS guy knocked on our door to see if we're okay.
RodLacroix / Via twitter.com

#3
Welcome to marriage. Here's the new way you fold towels.
HenpeckedHal / Via twitter.com

#5
[road trip]
Me: Want me to drive for a while?
Wife: Sure.
Me: Oh. That wasn't a real offer.
XplodingUnicorn / Via twitter.com 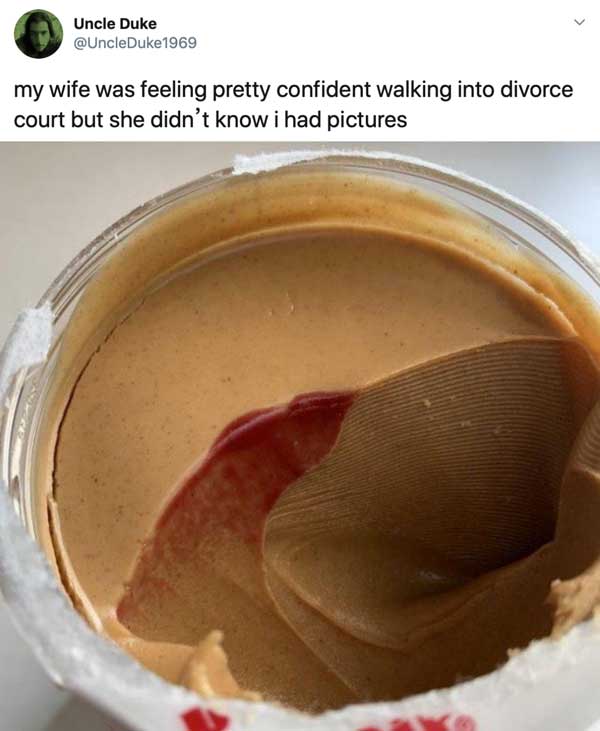 #7
Just a heads up, if you exchange the gift your wife got you, even if it’s her idea and she’s quote “totally fine with it”, this act will be used against you in a future argument at some point in the next ten years.
Average_Dad1 / Via twitter.com

#8
The best thing about being married is having clothes that match.
TheBoydP / Via twitter.com

#9
I always say “I love you” to my wife when she leaves because I’d hate for something to happen and the last thing she ever hears from me is, “while you’re at the store get po*p bags.”
RodLacroix / Via twitter.com

#10
My wife asked me if she had any ‘annoying’ habits and then got all offended during the power point presentation.
BattyMclain / Via twitter.com

#11
My wife says I'm acting like a toddler but maybe she shouldn't have put my food on the wrong plate.
daddydoubts / Via twitter.com

#14
Today my wife said “guess who I saw in Costco today?” then made me guess for like 10 min and when I didn't guess it was like “remember that super tan lady we saw walking down the street last week...” thats who she thought I might guess. a lady we don't even know that we saw one time.
dlicj / Via twitter.com

#15
ME: *walks by to put anything away*
WIFE: [not even looking up from her phone] that doesn't go there
TheCatWhisprer / Via twitter.com

#17
My wife can slice cheese without eating a slice herself and I am starting to wonder if she is even human.
Cheeseboy22 / Via twitter.com

#18
My wife said I walk like an elephant and she can hear me coming a mile away. So I did the mature thing and snuck up on her 60 seconds later and scared the sh*t out of her. She has now filed for divorce.
dadmann_walking / Via twitter.com

#20
I forgot today was our anniversary but my wife forgot too and that’s really the best gift she has ever given me.
simoncholland / Via twitter.com 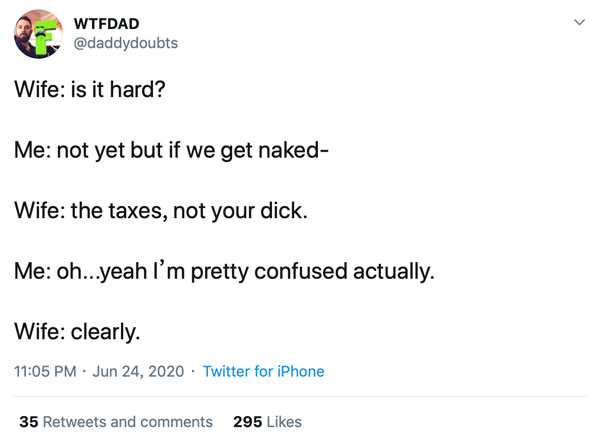 #22
Marriage is about finding that one special person to play “who’s going to empty the bathroom trashcan” chicken with for the rest of your lives.
TheCatWhisprer / Via twitter.com

15 Couples Who Are Not Afraid To Test Their Relationship

25 Questions Every Mom In The World Desperately Needs To Answer

16 Photos That Show How Close We Are With Our Pets

People Are Sharing Examples Of How Parents Apologize, And It's Hilarious, And True